Laughing Gas: What It Is & How It Helps Relieve Pain

It is easy to marvel at modern medicine when we think of how things have changed in the world of pain relief.

Before you may have had to rely on leeches, chewing on Willow bark, or even electric fish to get you through surgery. Now, however, we have many quick and easy ways to stop us from having to grin and bear it, and aren’t we thankful!

One famous means of pain relief is laughing gas. While it is not guaranteed to leave you cackling like the Joker it can make what is likely an unpleasant experience an easier one.

Let our guide breakdown what it is and how it can help to relieve pain.

What Exactly Is Laughing Gas?

Nitrous Oxide, what we know as laughing or happy gas, is a chemical compound gas that is used medically for pain relief.

It works by blocking neurotransmitters as well as increasing the level of natural opioids and dopamine after finishing its journey through the bloodstream to the brain via the lungs. Its results are often described as feeling euphoric, leading some people to laugh.

It is often mixed 50/50 with oxygen when administered and has no long-term side effects when used in the small amounts necessary for medical procedures.

Laughing gas has a long history beginning back in 1772 with Joseph Priestly credited with inventing it, although it started to get more coverage in 1844 when pioneering dentist Horace Wells started its use as a form of anesthetic. That may not seem a big deal now, but just imagine having to have a tooth taken out or leg amputated without any form of pain relief. Yikes!

It is safe to say that once it started to be used there was a collective sigh of relief from the general public.

The Benefits of Laughing Gas 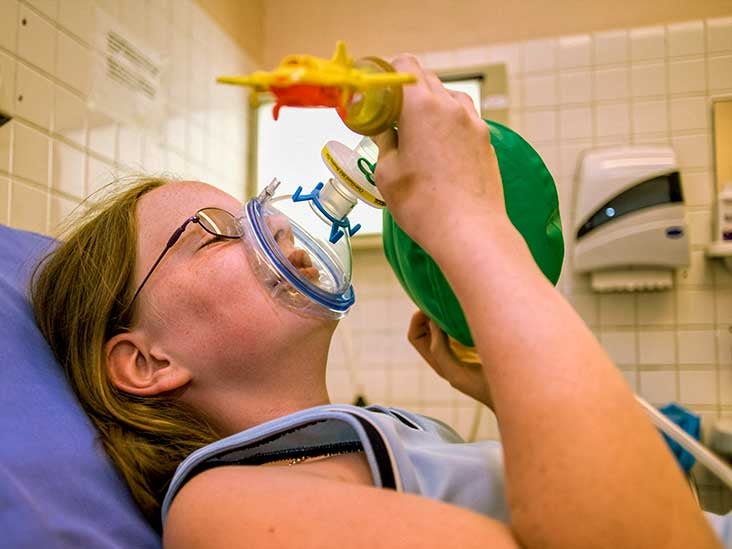 Laughing gas is seen as a great option in the world of medicine for a number of reasons.

Unlike an anesthetic, it doesn’t remove the pain but rather disconnects the mind from focusing too much attention on it. This disassociation results in an anxiety reduction, often the biggest obstacle for anyone fearful of a medical procedure where they have to be awake.

If you are scared of needles it can also help to take away those worries.

One of its biggest advantages is that it works fast and wears off quickly once it stops being inhaled. This means that patients aren’t groggy and need long recovery times, as you would with a general anesthetic.

You are most likely to come across laughing gas in two places. When you go to the dentist or when in labor.

As mentioned earlier, dentists have long used laughing gas to ease anxious patients’ fears of the dentist chair. It is safe to use on adults and children, who benefit greatly from having the edge taken off what can be a stressful experience.

The relaxing effects of laughing gas also reduce the gag reflex in patients, and you may be so calm that they won’t even need to use needles, great news all around!

In the UK and Canada, laughing gas is commonly used for women in labor and while it waned in popularity in the US it is having a comeback due to its many advantages.

As well as providing pain relief, unlike an epidural it allows a woman to move while in labor. A woman is also in control of when she takes it, with some preferring to inhale during a contraction and others before or after.

A Breath of Fresh Air

Countless millions all over the globe have reaped the benefits of laughing gas in their medical procedures. We hope that our explanation has left you with a clear idea as to why.

If you enjoyed this post don’t hesitate to check out the other great health content on our site.

How To Hire Movers:… How To Hire Movers: The Basics Explained

Your Child's Vision: What You… Your Child's Vision: What You Should Know About Genetic Eye Diseases