The Good And The Bad Of Eating Grilled Meat

With the weather getting warmer and the kids getting out of school for the summer vacation, more and more people are starting to host parties and events outside. The fewer rainy days between sun-filled afternoons are a perfect time to fire up the barbecue for those occasions.

More often than not, people are even willing to grill up a few hamburgers just for a quick dinner. The delicious smoky flavor that firing up your barbecue gives is one of the reasons why everyone loves barbecuing. A small problem can pop up though, especially during the summer barbecue season. Since meat is a common food that’s cooked on a barbecue grill, many people question how healthy grilled meat is.

Meat, regardless of the way that it’s cooked, can contain quite a bit of fat. And, other than some iron and protein, it doesn’t seem to have all that many nutrients as well. So is it really all that good to eat grilled meat?

We’ve collected a few good and bad points about eating grilled meat to help you come to a decision for yourself. As with most foods, moderation is always key but so is eating the right amount. If you’re interested in getting a new grill or some new accessories and sauces to go along with your outdoor kitchen setup, click here to check out a great source for all things BBQ-related. 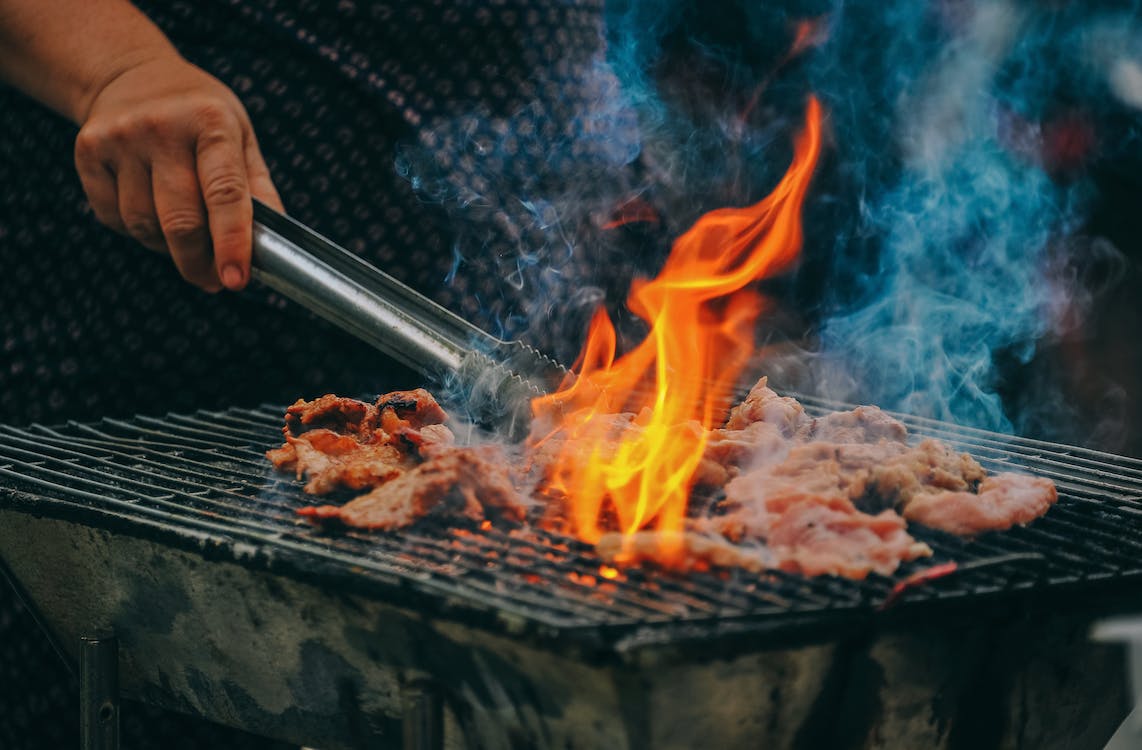 One of the most beneficial parts of grilling is how much fat is lost in the process. When grilling on an open barbecue grate, the meat begins to leave juices once the heat reaches a certain level. Anyone that’s ever cooked meat before knows that the liquid that leaks out is, more often than not, the melted fat from the area around the outside of the meat.

When it comes to other styles of cooking, the fat stays in the pan or pot, letting the meat reabsorb it later on. Thanks to the open grate, the fat instead drips away and burns off, leaving the meat much healthier.

This is one of the reasons why it’s also recommended to use leaner cuts of meat, like chicken. Since it already doesn’t have all that high-fat content, any fat that is in it can melt off and leave a perfectly healthy piece. The lessened fat in a lean cut of meat then becomes a great source of protein. Additionally, removing any skin and fat from the meat also adds to this.

2. You don’t need any additional butter or oil

If you use a skillet or griddle pan along with your barbecue, you no longer need to use any butter or oils to cook your meat. Thanks to the higher heat levels you can reach using a barbecue grill, the heat easily transfers to pans you put onto it.

The juices that are released then can be used as a base to continue cooking the meat and adding more flavor to it. To make the most out of these meat juices, you can even add some vegetables to cook in them, effectively acting as a seasoning for them.

3. The meat retains its nutrients

Much like grilling vegetables on your barbecue, meat also has a number of different nutrients that the grilling process helps retain. In addition to the iron and protein that most cuts have, a good piece of meat will also have thiamine, zinc, and riboflavin in addition to many more nutrients. Many of these vitamins though tend to be B vitamins, which are needed to turn carbs into glucose that’s then used to give you energy.

The heat from the barbecue cooks the food quickly, searing the outside first before the inside can cook. While the meat does release juices, most of the vitamins that the meat has stay inside it and are then absorbed into your body. In proper moderation, grilled meat can help you gain more energy and increase your metabolism to reduce fat.

1. Not all the fat is removed or reduced

If you’ve ever cooked meat in a pan, you’ve seen how much fat and juices tend to be released from it during cooking. Though most of it is fat from closer to the surface of the meat, there are still layers of it closer to the center of the cut. The heat that gets into the center melts the fat there, but due to how the meat is grilled, it more than likely gets reabsorbed into the meat again.

Briskets and heavier cuts of steak are more than likely bound to be far more unhealthy than leaner and thinner cuts because of this. While the meat is delicious, briskets and thick steaks – in addition to other fattier meat – are a higher health risk.

As mentioned before, certain cuts of meat typically contain a larger amount of fat than others. If you find yourself frequently grilling burgers, sausages, and hotdogs for lunch or dinner, you’re bound to end up gaining more weight than you expected. These meat types often contain a higher level of cholesterol, saturated fats, and calories that when combined with fattier side dishes, can end up being quite unhealthy. Some burgers alone can end up containing anywhere from 200 to 750 calories, which can make up some people’s entire daily calorie limit in a single meal.

Moderation and careful consideration are more often one of the most important steps that you need to take when dealing with your health. Grilled meat is good for your health, thanks to the nutrients and proteins that are in it, but only with the right kinds of choices being made. That doesn’t mean that you entirely stop eating foods that taste delicious to you.

If you’re looking into the benefits of eating grilled meat, focus more on grilling leaner beef and pork meat in addition to fish and chicken. Most of the flavours that you enjoy from burgers and steaks will still be there but in a healthier form. Then, once or twice every other week, you can splurge with a nice juicy Angus burger with onion rings or a bratwurst hotdog.

Does A Senior Loved… Does A Senior Loved One Need Help? Here’s How To Know

How To Get Fashionable Promotional… How To Get Fashionable Promotional Logoed Tote Bags?